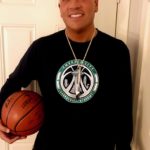 Coach Joe is a passionate player, coach, and mentor in the beautiful game of basketball. He has taken his personal game from toddler hoops in the back yard to a college level scholarship. He continues to play for a well-respected men’s league and has a winning driven mentality mentorship, leadership, and teamwork. Coach Joe has taken many broken programs and turned them into confident, winning teams.

Coach Joe has taken some time away from his beloved game and has recently married Mrs Cindy Leota and is enjoying time with his newly blended family that he and his wife share 4 daughters, 2 sons, and spend lots of time with his first grandson. He is anxious to get back into the game he is so passionate about and is ready to go with much ambition.